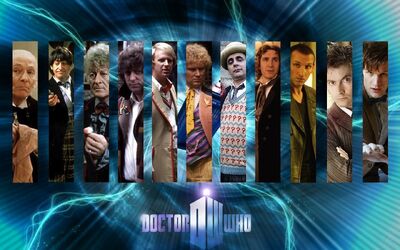 The User Series gives each contributing writer on this wiki to write thier own series featuring one of the Eleven Doctors and thier companions, real or fan made.

If there are any questions as to how this idea works, contact TheTrueDoc or PhotonCommander10.

The Tennantfan Saga makes up all episodes by Tennantfan. It follows the Eleventh Doctor and various companions, starting with Kiera Alexandra.

incarntions of the doctor Edit

This is an exciting new series announced by Martello736 on 20 August 2013. Episodes will be released individually beginning on 31 August 2013. At least 5 episodes will be written by head writer Martello736, with the other 5 expected to be written by guest writers. If interest in the series is low, more episodes will be written by Martello736. It is thought that the series will be a darker, more sinister version of the current Doctor Who, exploring the concept of death and bereavement. The two-parter starring the Scavenging Hearts is confirmed to be taking place in Nazi Germany, and will contain the theme of euthanasia. A recurring theme throughout the series will be the mythical creature known as 'The Beast,' a plot point that will be revealed in Series 2, should this series prove popular enough.

Christopher Eccleston as the Ninth Doctor

Series 2 is a proposed sequel series to the first series, in which the mystery of the beast will be revealed. If the first series is successful, this series could begin production in early 2014.

Retrieved from "https://doctorwhoseries.fandom.com/wiki/User_Series?oldid=6030"
Community content is available under CC-BY-SA unless otherwise noted.